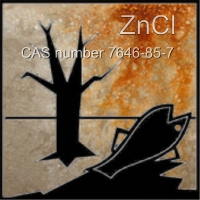 Zinc chloride is a skin and respiratory irritant;
concentrated solutions are acidic and corrosive;
dangerous to the environment and very toxic to aquatic organisms;
causes burns to any area of contact;
harmful if swallowed or inhaled;
affects the cardiovascular system.

Profoundly atmospheric. Capable of seeping into your aural pores with a benefit, rather than being poisonous. Though fully able to disturb your environment, it is in a gainful, cerebral manner, with a soft but very strong energy. Well focused and poignant, and provocative enough to make you think twice, which is always a good thing. A nice vehicle for transporting an important message. Good formulae of creative expression. Slow, serene, and subtle enough to subliminally transfer meaningfulness. Literally mesmerising in places, lulling your senses into a receptive state. Brilliant sound and rhythm manipulation.
(presentation by Ivan1984 - http://www.jamendo.com/en/user/Ivan1984)

Reviewer: SfintRecords - favoritefavoritefavoritefavorite - June 22, 2009
Subject: Review by AKheon on rateyourmusic.com
Ominous, rust-hued image of an environmental hazard sign (which is used as a cover) is a good sign of what to expect. Music contained within is sullen and steamy with synthetic washes and melodies. A result of intermixing chemicals which produce non-favorable reactions together, poisonous air, burned skin. Or so the project members would at the very least like you to think. This whole concept, of eroding chemical landscapes, dilapitation, future and science manages to be playful and dark at the same time. It's lively in the sort of way which makes you think of magical assembly line-centric factories (like the one in Edward Scissorshand, remember?), and on the other hand, real life gone horribly wrong. A lot of potential, especially when considering current state of the world, period.

It's clear the band members' preference lays in creating long, smoothly flowing soundscapes instead of "songs", but the music never strays too far into ambient and almost always opts to retain a sense of minimalistic melody. There are no vocals or lyrics, though some voice-like instruments are used in the background for some songs. What else? The music for the large part stays soft and hazy, and distorted instruments, whenever applicable, are kept largely in the background (though exceptions exist, like in "Zinkchlorid").

It is a highly atmospheric and slowly suffocating experience. Like being fumigated through the speakers. An endurance test, something unique to sink your teeth into, not without a burning aftertaste. Can be useful to know, especially for the fans of either of the artists involved in this project (Cometa and Circumliver).

Uploaded by SfintRecords on June 6, 2009